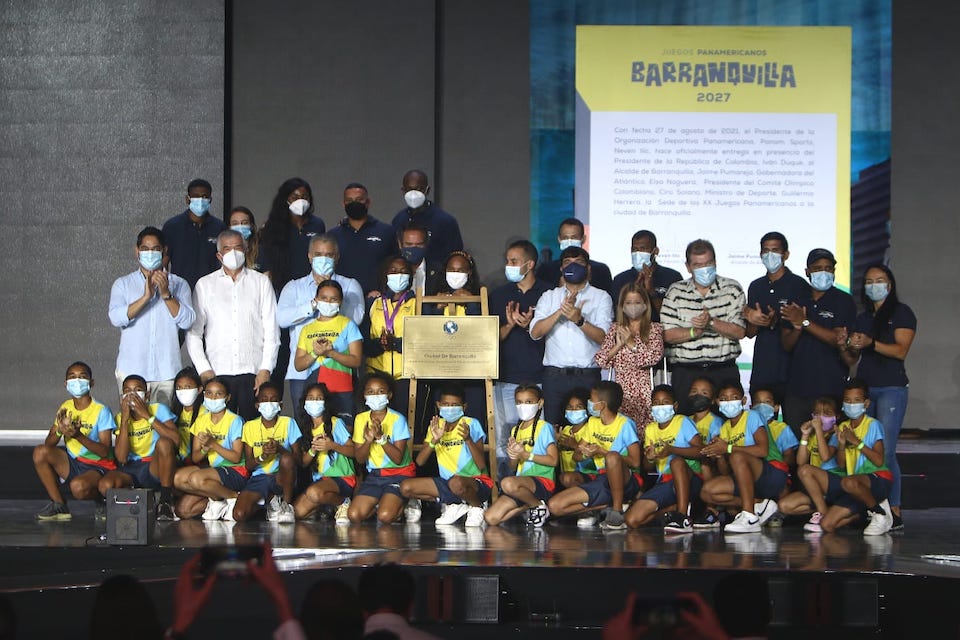 Panam Sports President Neven Ilic made the official announcement and signed the Host City contract along with the President of Colombia, Ivan Duque, the Governor of Atlantico, Elsa Noguera, the Mayor of Barranquilla, Jaime Pumarejo and the President of the Colombian Olympic Committee, Ciro Solano, during a ceremony held tonight.

The candidature of the coastal Colombian city to host the XX Pan American Games was approved by an absolute majority of the member countries of the Pan American Sports Organization.

BARRANQUILLA, COLOMBIA (August 27, 2021) — The twentieth edition of the largest multisport event in the Americas will be held in Barranquilla, Colombia in 2027. This was made official by Panam Sports President Neven Ilic after the Host City contract was signed in an exciting and symbolic event featuring the President of Colombia, Ivan Duque, Colombian Olympic Committee President Ciro Solano, Governor Elsa Noguera, Barranquilla Mayor Jaime Pumarejo and many great stars from Colombian sports history.

With vast experience in organizing sporting events, including matches of Colombia’s National Football team and the 2018 Central American and Caribbean Games, Panam Sports believes that the city of Barranquilla has everything necessary to deliver a world-class event such as the Pan American Games. The city is highlighted by its great sports infrastructure and above all, the passion for sport shown by its people.

This is why the Executive Committee of Panam Sports, together with the complete support of its member countries, has confirmed this city and the country of Colombia as the organizers of the most important multisport event in the Americas that will qualify athletes to the Los Angeles 2028 Olympics.

“This designation that Panam Sports is making represents the very special recognition of a country that has shown an unconditional commitment to the development of sport throughout the continent. We were pleasantly surprised in 2018 with the organization of the Central American and Caribbean Games. Despite the pandemic, they continued to believe in us and are making an incredible effort by working hard for the first Junior Pan American Games of Cali 2021, which makes us very happy and motivated. That is why our member countries have decided to grant the hosting rights of our main sporting event in 2027 to the beautiful city of Barranquilla,” said Panam Sports President, Neven Ilic.

“I want to thank President Ivan Duque for the unrestricted support that he has given us in the past few months. We know the effort that he and all of the government and sport authorities of Cali and Barranquilla have put forth for continental sport and the youth of the Americas who undoubtedly represent our future,” added Ilic.

Hosting an event of this nature provides the Host City and country with unique opportunities to develop sport, considerably improve infrastructure, provide a boost to the region’s tourism and bring the best athletes throughout the Americas — many of which are World and Olympic Champions and idols — to help leave an incalculable legacy for Colombia and the entire next generation of athletes.

“This is the government that has supported the Junior Pan American Games and we decided to see them through because it was also a message that not even the pandemic is going to take away from us that possibility of dreaming big. We have their back and they have our support. I want this to not only be a project for Barranquilla and Atlantico, but also for the entire country. Colombia is going to host the Pan American Games for the second time in history, as it did it in Cali in 1971, and as it will do again at the Puerta de Oro, in Barranquilla in 2027. We are all united to carry out that purpose. Long live Colombia! Long live Barranquilla!” said the President of Colombia, Ivan Duque.

“We want the continent and the world to see Barranquilla. We will be ready to welcome you, to show you what Barranquilla is today and, above all, what it will be in a few years. That is why we are giving you the keys to our city in this ceremony so that you can open the doors to your new home. We are already waiting for you and we want you to come and fall in love with this city,” said Barranquilla Mayor Jaime Pumarejo.

With this confirmation of Barranquilla as the Host City of the XX Pan American Games in 2027, the Olympic Cycles for the coming years are as follows: 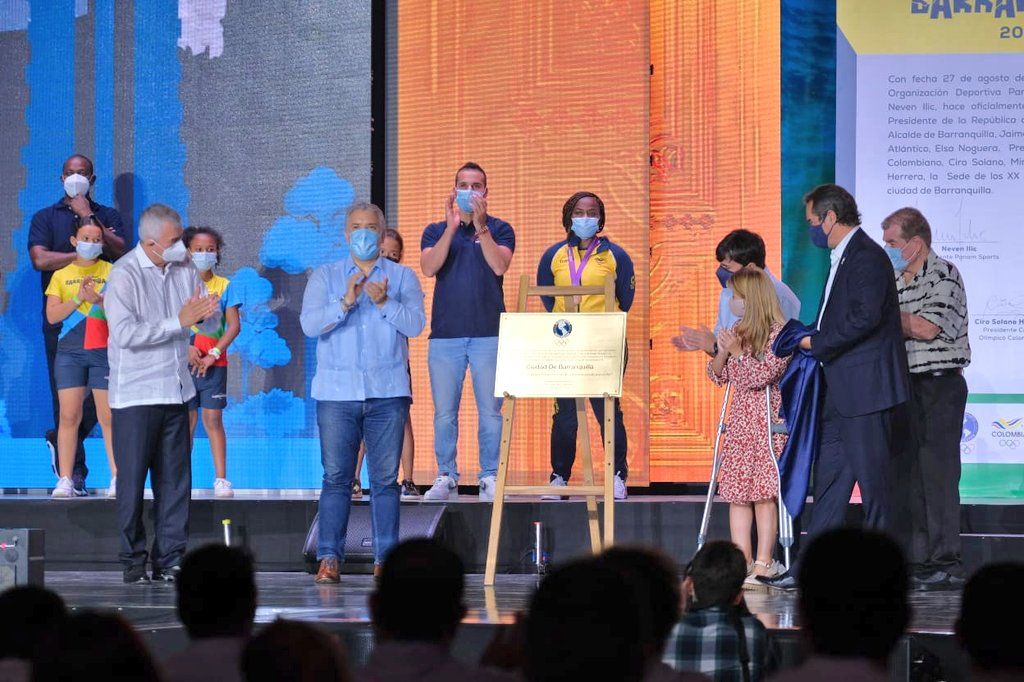 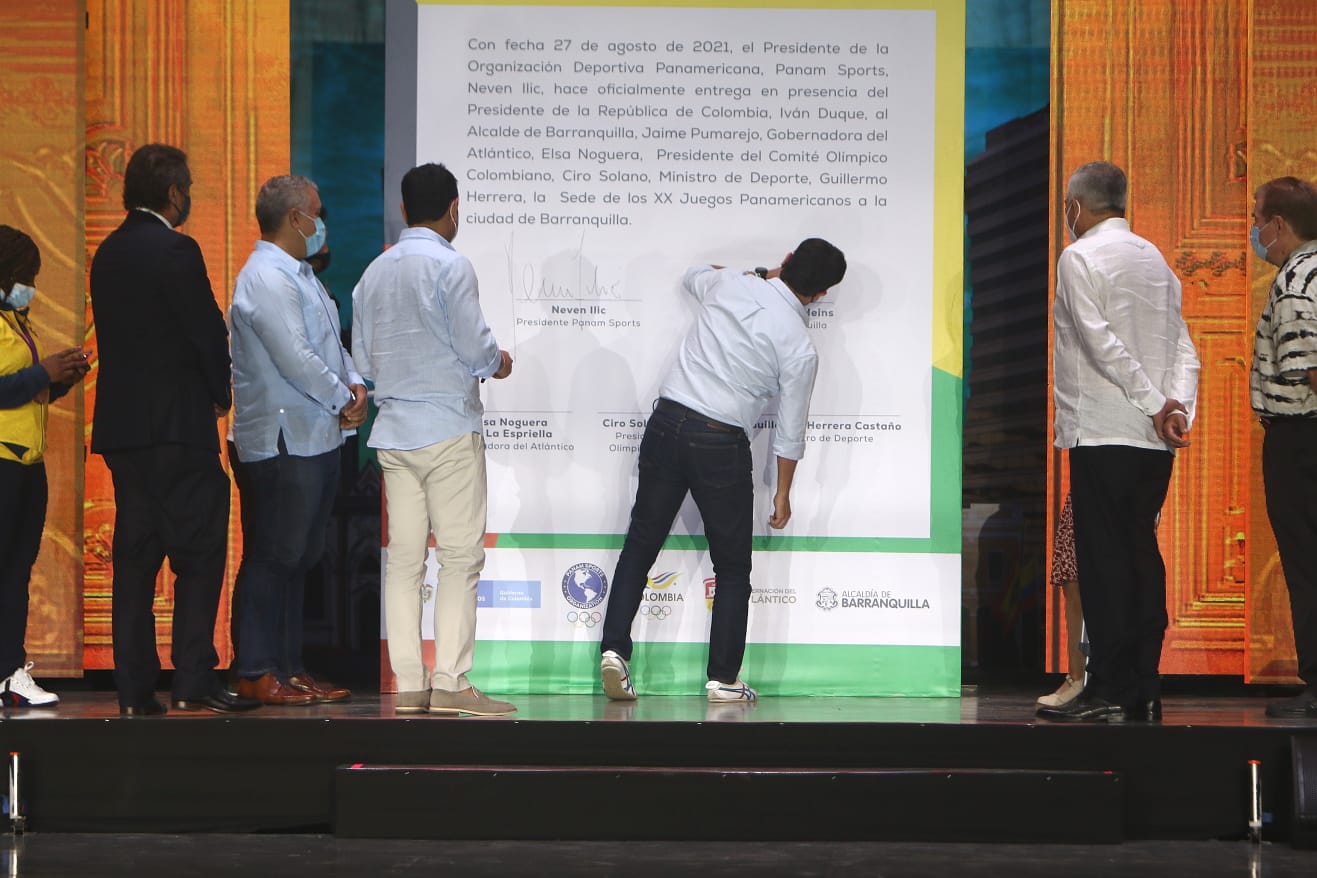