BRAZIL, CANADA LEAD THE WAY FOR THE AMERICAS AT WORLD JUDO CHAMPIONSHIPS 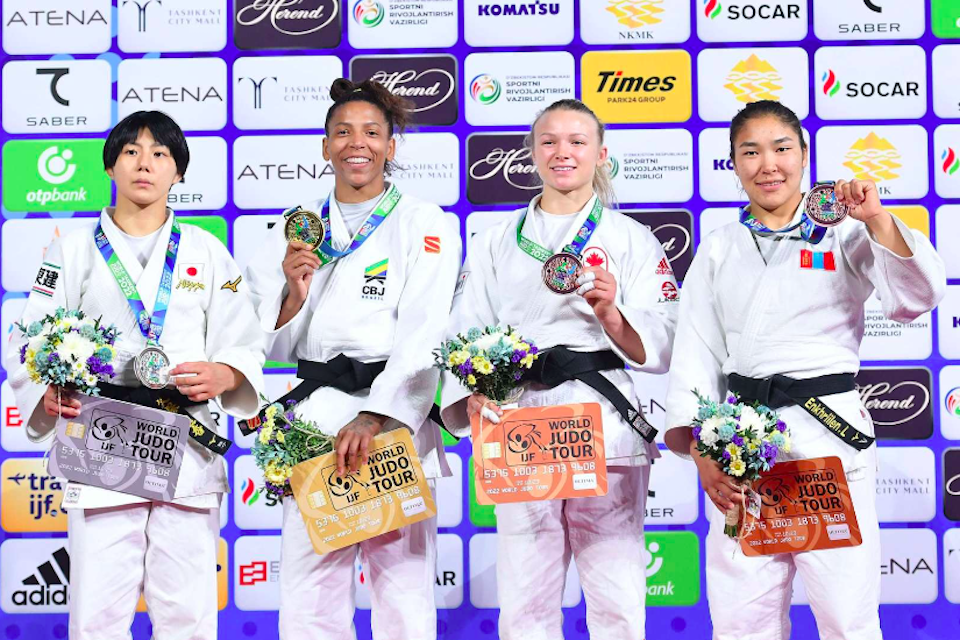 Led by their Olympic medalists, Brazil and Canada are the only countries of the Americas to reach the podium at the Tashkent 2022 World Judo Championship with many great athletes yet to compete in the final three days of competition.

The long-awaited comeback is complete for Brazil’s Rafaela Silva who won her first world championship gold since 2013 this week at the World Judo Championships in Tashkent, Uzbekistan.

The Rio 2016 Olympic champion took home the gold in the women’s 57kg division following a two-year suspension from competition due to a positive test for performance enhancing drugs. The two-time Pan American Games medalist is back to clean competition with an impressive victory in Uzbekistan.

Her teammate Daniel Cargnin joined her on the medal table by earning the bronze in the men’s 73kg competition. Daniel previously earned an Olympic bronze at Tokyo 2020 and a silver at the Lima 2019 Pan Am Games in the 66kg division at both events.

Canada has also earned two medals at the ongoing World Championships, led by Catherine Beauchemin-Pinard with a silver in the women’s 63kg weight class. The Tokyo 2020 bronze and Toronto 2015 silver medalist was also on hand to support Jessica Klimkait who earned the bronze medal in the women’s 57kg event. Klimkait was unable to defend her world champion title from 2021 that followed her Olympic bronze in Tokyo.

The American continent is represented by a total of 11 countries and 72 athletes, with Brazil and the United States bringing the largest delegations of 18 athletes each. Brazil, Canada, Chile, Costa Rica, Cuba, Dominican Republic, Jamaica, Peru, Puerto Rico, USA and Venezuela are the countries competing in the World Championships.

Brazil will seek to improve on its current 5th place standing in the medal table with the powerful trio of Mayra Aguilar (78kg), Beatriz Souza (+78kg) and Rafael Silva (+100kg). Aguilar is a three-time Olympic bronze medalist, the 2017 world champion and the defending Pan Am Games champion from Lima 2019. Souza is the Lima 2019 bronze medalist while Silva is a two-time Olympic medalist and a silver medalist at the Guadalajara 2011 Pan Am Games.

The United States’ best chance at a medal rests with L.A. Smith, the silver medalist from Lima 2019 who will compete in the 100kg event tomorrow.

Panam Sports congratulates all of the athletes representing the Americas at the World Judo Championships.