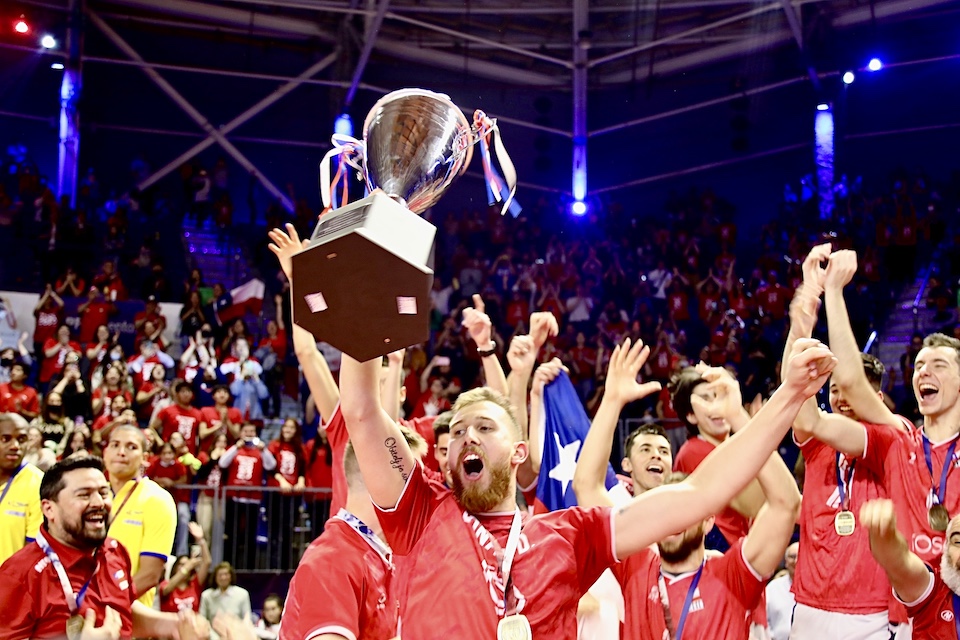 The Chilean team went undefeated to earn the gold medal in the tournament held in Santiago, Chile. They defeated Argentina by 3 sets to 2 in the final to qualify to the Santiago 2023 Pan American Games along with Colombia.

It was a dream ending for the Chilean team. The Gran Arena Monticello in Santiago was filled with more than 3,000 people in the stands while Chile’s National Television broadcast the gold medal final to millions of Chileans and the Panam Sports Channel live streamed the match throughout the world.

Chile had already defeated Argentina on Friday by a tight score of 3-2 before facing off once again to determine the champion. The albiceleste team wanted revenge and despite the fact that both teams already qualified for the Pan American Games — Argentina for reaching the final and the Chileans as the Host Country of Santiago 2023, both teams fought hard for the title of champion.

Argentina began the match with incredible motivation, and despite the fact that the entire stadium was rooting against them, they won the first set  25-22 with solid defense and blocking, and effective attacking from Vicentin, Balague and Gallego.

The Chileans returned the blow, playing a great game with outstanding performances by Vicente Parraguirre and Dusan Bonacic that led them to win the set 25-22 and tie the match.

It looked as Chile began to feel tired in the third set and Argentina took advantage, showing a second wind to take the set 25-20. That caused the fans in the Monticello Arena to wake up and encourage their Red Warriors with more energy.

Chile steamrolled Argentina to take the fourth set. Gago, Parraguirre, Bonacic, Ibarra combined to put it to their opponents and move on to the final set easily with a score of 25-17.

Both teams knew the fifth set would be a grind with gritted teeth. Both teams gave it their all on the court going point for point with the game up for grabs. In the end, Chile prevailed thanks to a spike from the best player in the championship, Vicente Parraguirre who sealed their victory and the title of South American Volleyball champions.

“It is impossible not to be happy today, look at all the people who came to support us, this place is exploding. The key for Chile was never to give up, the goal has always been to get better and go all the way,” said tournament MVP Vicente Parraguirre.

“I’m too happy. It feels unreal. At night I will be able to understand what this means for Chilean volleyball. The public and their support is much needed. Without them we would not have been able to achieve this title. I dedicate this victory to Matias Banda,” said Chile’s Tomas Gago.

The Colombian sextet defeated their counterpart from Peru 3-1 in the preliminary match and received a well-deserved award in addition to their bronze medal. For the first time in their history, a Colombia men’s volleyball team will compete at the Pan Am Games.

They lost against Chile and Argentina but managed two victories against Peru. The last one determined the bronze medalist, with Colombia prevailing by a final score of 3 sets to 1.

After the victory, Leandro Mejia described the emotion of qualifying for Santiago 2023.

“We take this bronze medal as a victory. We have been working on this for a long time. We are a very young team and we are happy to qualify for the Pan American Games for the first time in history. We dedicate it to all of Colombia,” said Mejia.