EXPERT CONNECTION: WHO IS THE BEST ATHLETE IN HISTORY? 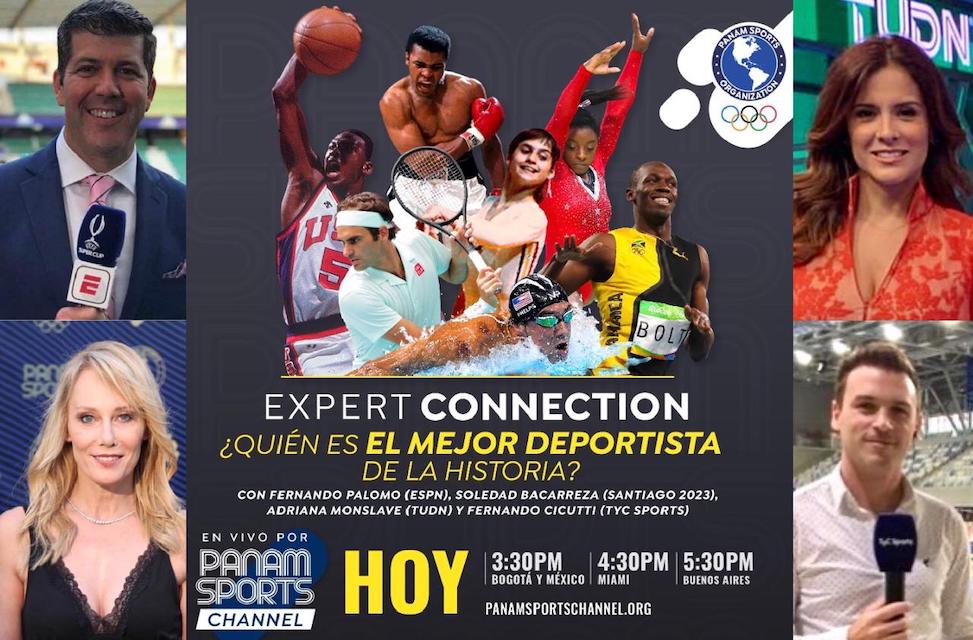 A question as difficult as it is exciting is what the Expert Connection will tackle this afternoon on the Panam Sports Channel. Four prominent communications professionals will share an entertaining conversation centered on this question.

Fernando Palomo of ESPN, Adriana Monsalve of TUDN, Fernando Cicutti of TyC Sports and the Director of Communications for the Santiago 2023 Pan American Games and sports commentator Soledad Bacarreza will be today’s guests at 4:30pm ET (Miami).

SANTIAGO, CHILE (July 9, 2020) — The question of who holds the title of the greatest athlete in history has been debated across sports programs, in conversations with friends and even during family meals. However, reaching an agreement on who this athlete is can take days, months or perhaps never end.

On today’s edition of the Expert Connection, the Panam Sports Channel has brought together four great communications professionals to talk about sport while focusing on this question of who is the best of the best while interacting with the audience and sports fans who tune in.

Muhammad Ali, Michael Jordan, Usain Bolt, Roger Federer, Simone Biles, Michael Phelps, Ayrton Senna, Diego Maradona, Lionel Messi, Pele, Nadia Comaneci and many other legends from the sporting world are just some of the names that were included in the poll shared on Panam Sports’ social media. That poll received thousands of comments from passionate followers who held a heated debate about who is the best of all time.

Live today at 4:30 pm (ET), prominent Salvadoran journalist and ESPN host Fernando Palomo will lead this fascinating discussion with three other outstanding journalists. Palomo has witnessed countless international sports competitions throughout his successful professional career, including Soccer World Cups, Champions League finals, the Olympics and of course the Pan American Games. Adriana Monsalve, a Venezuelan journalist who has worked for Telemundo and ESPN and today is the face of TUDN where she has covered the NBA, NFL and Soccer World Cups, among many other events, will also form part of the panel.

Joining them will be Argentinean journalist and host for TyC Sports, Fernando Cicutti, who has covered two Olympics, four Pan American Games, Hockey World Championships and Davis Cup finals, among many other competitions. Also joining the discussion is the Director of Communications for the Santiago 2023 Pan American Games, Soledad Bacarreza, with her extensive broadcast resume covering no less than nine Olympic Games, (six Summer Games and three Winter) of which five included on the field reporting.