JULIO MAGLIONE: “I DID NOT EXPECT THIS HONOR” 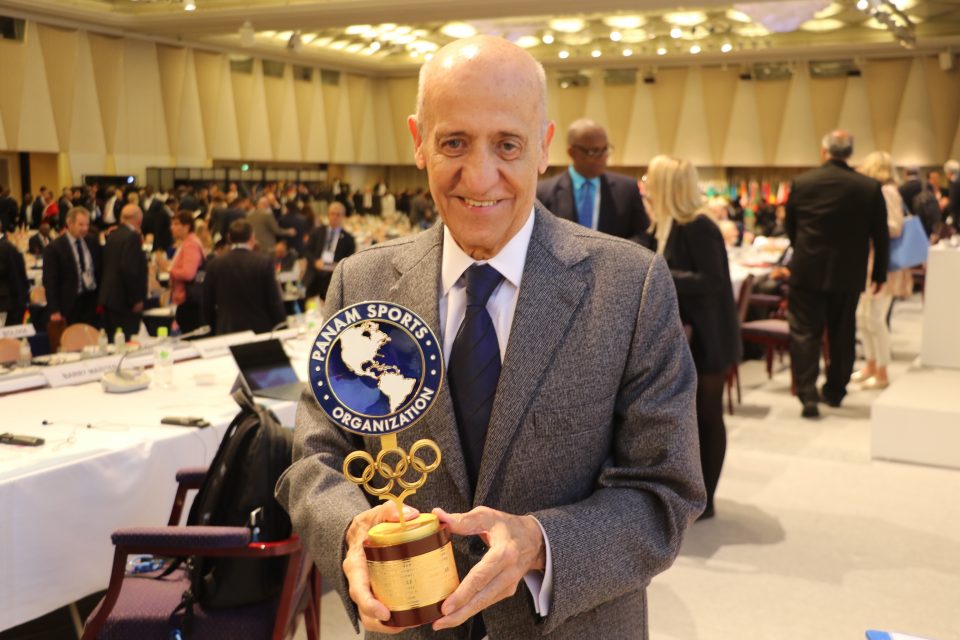 It was a special ANOC General Assembly in Tokyo for Julio Maglione. Not only would this be his last after years as a member of the Executive Council, but also because the temporary resignation of ANOC President Sheikh Ahmad made Maglione the association’s Acting President for the two-day meeting featuring Olympic leaders from 206 countries.

After two intense days of work, it was time to bid farewell to the 2018 General Assembly, but not before ANOC Secretary General Gunilla Lindberg gave the floor to Panam Sports President Neven Ilic to the surprise of the attendees.

There was total silence in the Assembly as President Ilic took the microphone and began to describe Julio Maglione as a true lover of sport and an example for all sport leaders of the world.

“He has been a great guide, a man who has always been willing to help new generations of leaders, a friend who has dedicated a lifetime to sport, who has fulfilled the active presidency of this 2018 Assembly and today will leave the ANOC Vice Presidency for me to assume,” Ilic told the gathering of the world’s Olympic leaders.

President Ilic invited all the Vice Presidents of the Pan American Sports Organization – Keith Joseph, Carlos Padilla and Mario Moccia – on stage to deliver the Panam Sports Award to an excited Julio Maglione.

“The truth is that this is a surprise by all of my friends at Panam Sports, especially President Neven Ilic who kept this secret very well. I did not expect this recognition. Presiding over this meeting was a great honor for me, and ending it with this recognition fills me with pride. Panam Sports is on an excellent path and I expect we will continue on that path. I want to thank all my friends, all the countries that make up this organization, not only for this distinction but for the daily work they do for sport and the importance that this has for social inclusion and peace in society,” Maglione said after receiving the award.

Julio Maglione’s impressive and extensive resume includes serving as President of the Uruguayan Olympic Committee, President of the International Swimming Federation (FINA), President of the Pan American Sports Organization (formerly PASO, now known as Panam Sports) and many other organizations in his storied 80 years of life. When asked what else remains for him in the world of sports leadership, he beamed a smile and said with his trademark joy and charisma: “There is not much to add, just to keep making friends.”

There is no doubt that Julio Maglione has already left a great legacy in the world of sport.