MARIO MOCCIA: “NOW IS THE TIME TO CONSOLIDATE THE GREAT CHANGE WE ARE MAKING AT PANAM SPORTS” 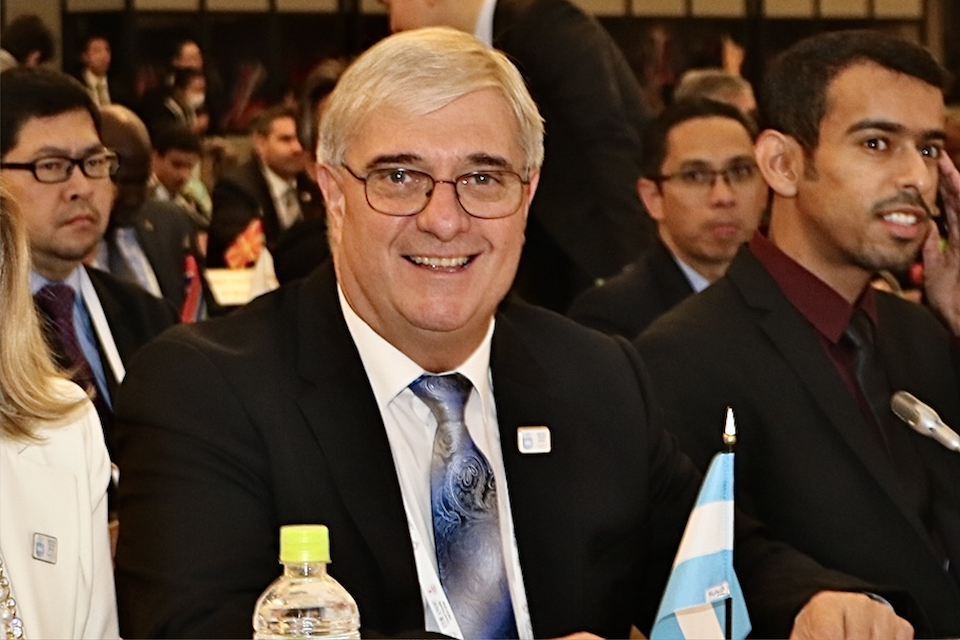 The Secretary General of the Argentine Olympic Committee — and the likely successor to Gerardo Werthein — was elected the First Vice President of Panam Sports during its General Assembly in a surprising result.

In this in-depth interview, Mario Moccia talks about his goals in this new position, his experience during the pandemic, what he expects from the Tokyo 2020 Olympic Games, and of course, the Santiago 2023 Pan American Games, where he is also the President of the Coordination Commission.

“Forgive me, I have been through thousands of procedures. I am less than 24 hours away from entering the ward to have a hernia operated on. But now that I am in the pre-surgery process, I am happy to speak with you.”

Despite the circumstances, Mario Moccia greets us with his characteristic joy and sympathy from Buenos Aires, Argentina. “They will operate on me and six hours later I can walk out, but I think I’ll stay one night in the hospital just in case,” he says.

Moccia has dedicated his entire life to sport, to his beloved handball, and to the Argentine Olympic Committee. He has also been a fundamental member of the Panam Sports Executive Committee. Last December, he received an outstanding acknowledgement in a vote from his peers, becoming the first Vice President of the Organization during its General Assembly.

“The truth is that gave me a lot of joy. Beyond the formality of the positions, it implies greater responsibility, and I will collaborate with whatever the President requires of me. It honors me a lot, and as always I will give myself entirely, with my experience and passion, to help the sporting development of the continent and of our beloved athletes,” said Mario Moccia.

Did you imagine before the election that you would have so much support from the member countries of Panam Sports?

It was clear that I had support, but I also knew that I had great opponents. It went beyond the friendship I share with Jimena (Saldaña) and Keith (Joseph), because they are very important leaders with extensive experience and very representative. But hey, I was confident that I would be elected and the truth is, I am happy and grateful to all who showed me their trust.

What is your opinion of Panam Sports today, and what are the goals you have set for yourself in this new position?

The management that has been carried out has been tremendous, revolutionary. The organization has been modernized, great progress has been made in its image, communications, marketing, internal management and with the NOCs. We all feel part of it and my goal is to continue working as a team, consolidate this change, strengthen the organization and improve the democratization of the participation of all areas, including with athletes and women. Thus, to continue with this beautiful management that has us all very proud. Important challenges are coming such as the First Junior Pan American Games of Cali 2021, and Santiago 2023, and we want them to be two unforgettable festivals for everyone.

2020 was an extremely difficult year for everyone, and sport, of course, also suffered unexpected consequences. What has been your experience in this time and how do you see the future with the pandemic still present?

It was a very hard year, unimaginable. Sad also, because many people lost their lives. I never imagined having to spend seven months without leaving my house. Working on my computer, on my phone, anyway. COVID made us appreciate things that previously seemed granted, but it has been very difficult. We all had to adapt; athletes, leaders, coaches, to the virtual era that had a great change in society. I would honestly like to turn back the time, but I see that the Coronavirus is still very present in 2021, the vaccine is very slow, we have the Games and there is a lot of uncertainty.

You just returned from the Handball World Cup in Egypt, on a journey that was not easy at all. How was the experience of being in the first mega sporting event of the year with a pandemic?

The Handball World Cup in Egypt was different. Of course, I think that it did not affect the competition, nor the sporting level, because I believe that beyond the isolation of each country, it was played at a high level. The International Federation acted in a very professional and responsible manner. It was tough for everyone as we had to undergo PCR checks every day, comply with very demanding security measures and without leaving the hotel with the bubble system. It was a competition without an audience, so it was different, but it was finally fulfilled and it was a successful World Cup.

TOKYO 2020: “EUROPE AND ASIA WILL ARRIVE WITH AN ADVANTAGE OVER THE AMERICAS”

When rumors grew about a possible new postponement and even cancellation of the Tokyo Olympic Games, the President of the International Olympic Committee, Thomas Bach, came out to deny this information and 100-percent confirmed the dates the Olympic Rings will come to Japan.

However, the uncertainty is still very great in athletes and leaders.

“Between now and July I think there could be a lot of changes. A few days ago an instruction manual was delivered by the Organizing Committee. We are going to have systematic PCR checks, and I hope that most of the athletes arrive at the Olympic Games vaccinated. For me, having lived the experience of Egypt, I am convinced that Tokyo can be done perfectly. With strict security measures, arriving prudently before the event and with systematic controls, I think there would be no major problems. In terms of the public, I think it would be good if they were at the Games with security measures and the corresponding social distancing. I can’t imagine an Olympic Games without an audience,” adds Moccia.

Many coaches and athletes from our continent point out that they will arrive at a disadvantage compared to athletes from Europe or Asia. Do you agree with that?

I do not know if it’s true for everyone. Although it started later in the Americas and we have had more problems, we have been able to shorten the gap, but it will not be the same. I particularly think that the athletes who have qualified for Tokyo in most of our countries have managed to train. However, it is different for each sport. For example, for swimmers, they have been greatly affected. Having to go more than 3 months without being in the water, it is very difficult to recover from that. The Europeans and Asians I think are in better conditions, because COVID came earlier and they controlled it faster, being able to return to activity earlier. Europe and Asia will have an advantage over America, that is a fact.

COVID has also impacted the planning of many events. Among them the next Pan American Games in Santiago 2023. However, you have repeatedly praised the great work that the Chileans are doing despite the pandemic.

That’s right. I think they have done an excellent job, very professional. For the pandemic, more than one can hope for. There is a political decision by President Sebastian Piñera and Minister Cecilia Perez to keep the Games as a priority, maintaining the budget, initiating the bidding for the Pan American Village, among other things. Today the organization is very advanced in the respective areas, and the truth is we are very satisfied and on March 4th we will have another meeting.

We know that you already have to rest and prepare for your surgery in the next few hours, but first we would like to end this interview by asking for a message to all the athletes of the continent who are working hard for future sporting events and especially for Tokyo 2020.

My message is have faith. The Games are going to be held, so I hope that they train with passion, with conviction, that they try to seek the best of themselves. Sometimes adversity shows you a side that you did not know and that can help you obtain better results. The pandemic is one more stumbling block to overcome. With dedication and a lot of work, we will all succeed. Be strong, move forward and have optimism that everything will be fine.”

Mario Moccia hangs up the phone. In less than 24 hours he will undergo a simple surgery in his native Buenos Aires, which he postponed until after the Handball World Cup in Egypt and prior to the Tokyo 2020 Olympics, because this sports leader does not stop. This will be a brief pause in his life for health reasons, but in a couple of days he will already be working non-stop for the sport of his country and the entire continent.