NEVEN ILIC: “LIMA 2019 IS A NATIONWIDE EVENT THAT MUST INSPIRE ALL PERUVIANS” 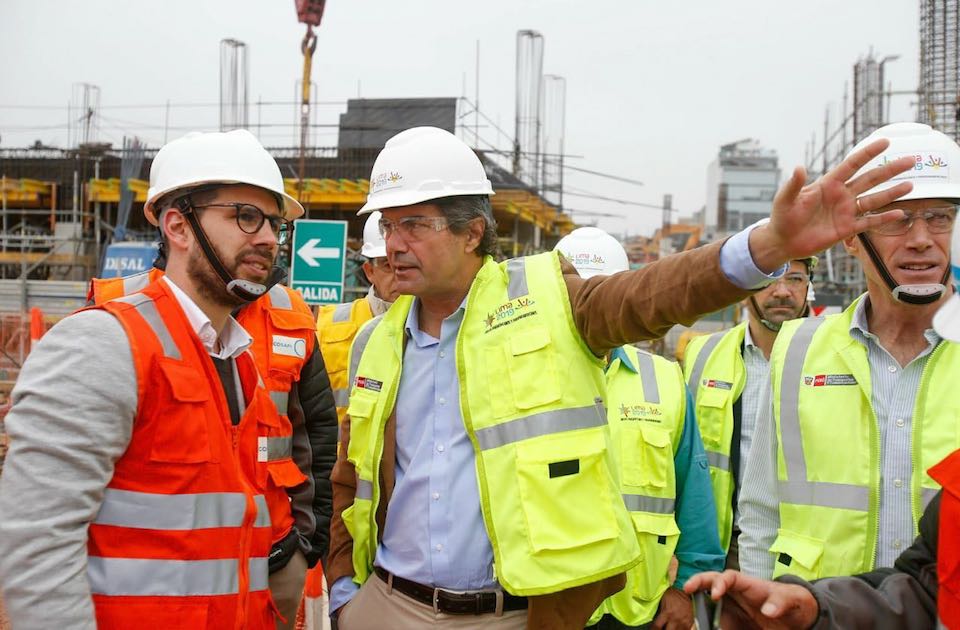 On an official visit with Secretary General Ivar Sisniega, the Panam Sports leaders met with the Lima 2019 Organizing Committee (COPAL), visited the venues under construction and presented the new Director of Major Events at Panam Sports, Mario Cilenti.

LIMA, PERU (July 6, 2018) – During his trip to the Peruvian capital to check on preparations for Americas’ largest sporting event next July, Panam Sports President Neven Ilic shared his thoughts on the country’s progress being made in both infrastructure and sports development.

“Peru is destined for great things in sports. The country already demonstrated this by qualifying and playing in the 2018 FIFA World Cup in Russia, and now the most important challenge is coming with the organization of the Lima 2019 Pan American Games. Believe me, they are the great envy of many countries in the region to have this incredible possibility,” Panam Sports President Neven Ilic said while touring the facilities of the National Sports Village (VIDENA).

Ilic acknowledges that he really liked the play of Peru during the World Cup and says he would have liked to see the team directed by Ricardo Gareca make it to the Round of 16. “But we know that’s how it goes in sport; sometimes you win and sometimes you don’t. But they have a very good team and Paolo Guerrero is a tremendous player,” he said.

As a Civil Engineer, the Panam Sports President knows exactly what stage the works are in, how they are progressing and whether they will actually arrive in time to host the continental sports festival. This is why he remains calm.

“I am pleasantly surprised with the progress Lima has presented when we are a little more than a year away from the beginning of the Games. I see a professional team very committed to the leadership and the great work COPAL President Carlos Neuhaus has been doing. Some of the projects are advancing every day, and the Peruvian people remain very excited about the great party that will unfold during the Lima 2019 Pan American Games despite the lack of time remaining,” added Ilic.

As President of Panam Sports and a member of the International Olympic Committee, Ilic understands the importance of hosting the Pan American Games and the great benefits that come to the host country – from the legacy in terms of sports infrastructure to the tourist benefits and improving the image of the country.

“Peru will have world-class sports infrastructure as very few countries have. We hope that all athletes, media, authorities, congressmen and the general public  can appreciate the magnitude of the great work that is being done here and the tremendous legacy that Lima 2019 will leave. This is a nationwide event that needs the help of all Peruvians. There is still much work to do, but the benefits that Peru will obtain for hosting the Pan American Games will be substantial,” Ilic concluded.

The visit to the Peruvian capital lasted two full days and consisted of three primary objectives: to meet with the authorities of COPAL, visit the works of sports venues and the Pan American Village and also present the newest member of Panam Sports, Mario Cilenti of Argentina, who now serves as the Director of Major Events at Panam Sports and will work hand-in-hand with COPAL President Carlos Neuhaus.

Cilenti is an experienced professional with vast experience in the Olympic Movement among many other things. He has worked with six Pan American Games Organizing Committees and was instrumental in the organization of the Rio 2016 Olympic Games as well as the recent Cochabamba 2018 South American Games in Bolivia.

“I am very happy to join this great organization of Panam Sports. I know we have a great challenge ahead and I bring a lot of enthusiasm and motivation to contribute my experience and knowledge so that Peru can organize the best Pan American Games. There is no time to lose. Here we have to work 24/7. With commitment and passion, I am convinced that we will have a great sports party in July of next year,” said Panam Sports Director of Major Events, Mario Cilenti.