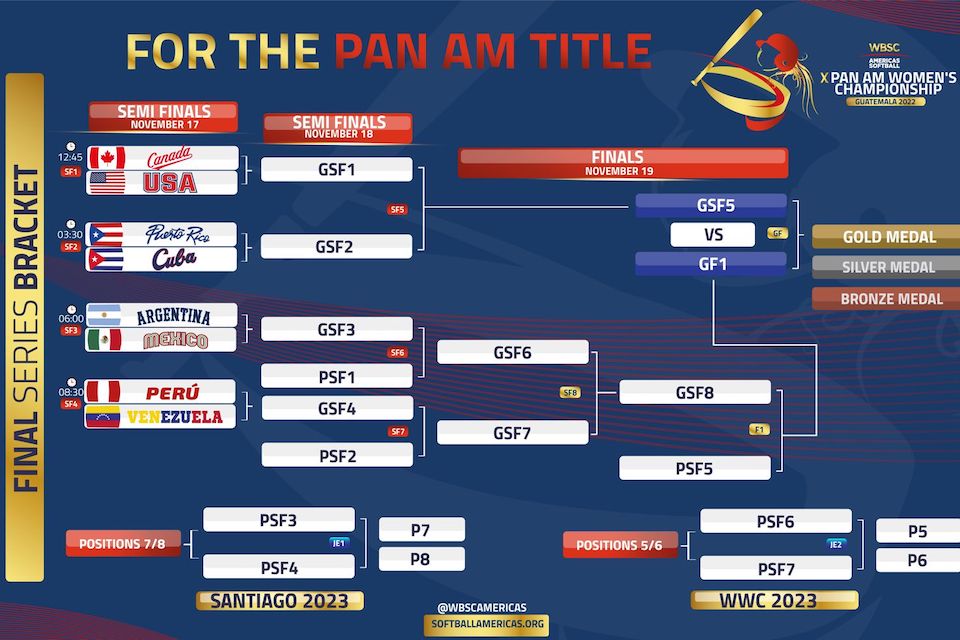 The best women’s softball players of the continent are competing for the title of continental champion as well as opportunities to qualify to the Santiago 2023 Pan American Games and the Women’s World Championship in 2023.

GUATEMALA CITY, GUATEMALA (November 17, 2022) — After five exciting days of group play, the leaders of the 2022 Pan American Softball Championship head to the quarterfinals today where teams will compete for a chance to reach the semifinals and keep their medal hopes alive.

The quarterfinals, semifinals and finals of this continental championship are streaming live on the Panam Sports Channel from November 17 to 19. The live women’s softball action begins today at 12:45pm in Guatemala City, Guatemala (1:45pm ET).

A total of 13 countries of the Americas entered the championships with hopes of standing atop the podium, but just eight now remain after the group stage led by the United States that finished a perfect 6-0 in the qualifying rounds.

After the U.S. and Canada battle for the first place in tomorrow’s semifinals, Puerto Rico and Cuba take the field at 3:30pm local time, followed by Argentina vs. Mexico at 6pm and Peru vs. Venezuela at 8:30pm.

As the top four seeds, Team USA, Canada, Puerto Rico and Cuba advance to the semifinals with a win, while a loss moves them to the repechage stage with their medal hopes still alive. The winner of Argentina vs. Mexico will then face the loser between the U.S. and Canada while the winner of Peru vs. Venezuela will face the loser of Puerto Rico vs. Cuba with both games offering repechage and a path to the final.

The semifinals highlight the action on November 18, followed by the repechage matches. Qualification to Santiago 2023 will also be on the line for the teams that fail to advance from the quarterfinals. The loser of the matchups between Argentina and Mexico and Peru and Venezuela will square off to determine the 7th and 8th place teams with of that game claiming qualification to next year’s Pan American Games.

The grand finale takes place on Saturday, November 19 once the repechage matches determine who will advance from the loser’s bracket to confront the winner of the semifinal in the top bracket.

The two teams that are eliminated from the repechage stage on November 18 will face each other to determine 5th and 6th place while the 5th place team will earn qualification to the Women’s World Championship 2023.