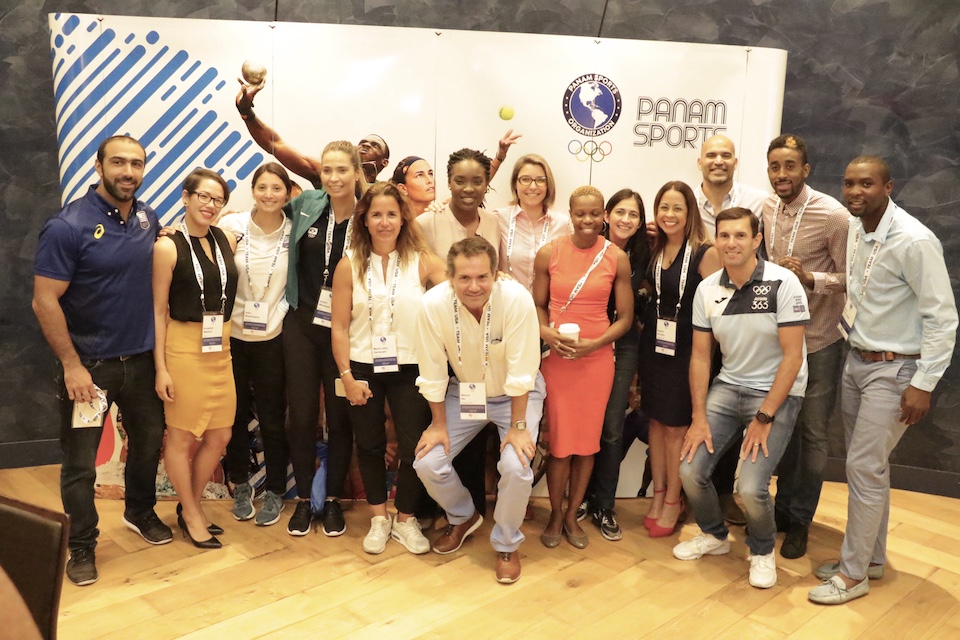 The second Panam Sports Athlete Forum in Miami brought together more than 70 athletes to collaborate and commit to make the athlete voice louder throughout the Olympic Committees of the Americas.

Athletes collaborated over three days to compile seven recommendations that will be sent to the Panam Sports Executive Committee for review in order to ensure the needs of athletes in the Americas are the organization’s core priority.

MIAMI, USA (October 29, 2018) – The largest and most engaging Athlete Forum ever held by Panam Sports, with support and funding from Olympic Solidarity, gave athlete leaders of the Americas the opportunity to shape the future of the continental organization and its premier event, the Pan American Games.

After three days of listening, sharing and debating about the issues most important to them, athlete leaders from the Americas have a renewed focus to find and develop their voice within their own National Olympic Committees.

In order to facilitate athletes in their quest for greater representation, Panam Sports is urging each of its 41 National Olympic Committee Members to create an Athlete Commission with a member who has voting rights on the Executive Board of that NOC. The deadline to create such a Commission is December 2020.

This is one of the most important of seven recommendations established by the Panam Sports Athlete Commission with guidance from the Olympic Solidarity team of the IOC, created using the invaluable input and ideas from the athletes who attended the Forum.

The seven recommendations are:

2. NOCs should enhance their administrative and financial support for the activities and the daily operation of their Athlete Commissions. The IOC Athletes’ and Olympic Solidarity Commissions as well as the Panam Sports Athlete Commission should also explore possibilities to provide further support in this area.

4. The Americas’ NOC Athlete Commissions should proactively engage with their respective NOCs to benefit from all programs available to them by the IOC (including Olympic Solidarity and Athlete365) and Panam Sports.

5. In collaboration with their respective NOCs, the Americas’ NOC Athlete Commissions should lead the implementation of the Athlete Career Program (Career+) at the local level.

6. Panam Sports should support the attendance and facilitate the activation program of the Panam Sports Athlete Commission at the Pan American Games and other regional Games within the Americas.

7. Panam Sports to evaluate the possibility of additional accreditations for athletes’ personal coaches at the training and competition venues at the Pan American Games.

“I’m really proud of the recommendations that came out of the Forum. We have seven really strong statements to our institutions that govern athletes here in the Americas. I’m proud that Panam Sports was here, our President Neven Ilic and Secretary General Ivar Sisniega, not only to listen and to speak directly with the athletes, but also to support the recommendations we made and they are excited about now going back and trying to implement them,” said Panam Sports Athlete Commission President, Alexandra Orlando.

These recommendations were made possible due to the unprecedented amount of participation by the more than 70 athletes who attended the Forum. Nearly all of the athletes were active throughout each segment, raising thoughtful questions and filling the room with lively debate during the breakout group sessions. Great contributions were also made by Panam Sports Athlete Commission members Carlos Santiago, Aliann Pompey and Andrea Estrada who led many of the sessions and discussions.

In fact, the level of participation was so high that nearly all of the planned sessions and topics went over the allotted time. Panam Sports was more than happy to extend the program to ensure as many athletes as possible could share their ideas, concerns or questions with the other dedicated athletes at the Forum.

“The Forum was incredible, spectacular. We touched on many important topics, several of which were also discussed two years ago, but now we’ve seen the conclusions and the fruits of that labor. Now there are Athlete Commissions that are more structured, more countries that have formed commissions and Panam Sports is very interested to put forth great efforts to create more with a President committed to the relationship between the NOCs and their athletes, which I believe is vital in the Olympic Movement of today,” said Paulo Cesar Del Villar, an Olympic hurdler from Colombia.

But the athletes were not the only ones who helped create an unforgettable forum. Panam Sports President Neven Ilic opened the Athlete Forum, expressing his commitment to the athletes of the Americas and why they will remain as the organization’s most important stakeholders.

Panam Sports Secretary General Ivar Sisniega presented the Strategic Plan which emphasizes athletes as the core of the organization, while also listening to the needs of athletes and agreeing to share the recommendations of the Forum with all the NOCs throughout the continent. An Olympian himself, Sisniega also offered advice about the transition from athlete to the work force and the innumerable opportunities that exist after a competitive career has ended.

Detailed presentations from IOC representatives touched on topics such as the Athletes’ Rights and Responsibilities Declaration – which the Panam Sports Athlete Forum has unanimously supported – the Athlete 365 platform, the burgeoning Athlete Career Program as well as the Prevention of Competition Manipulation and Match Fixing and the Prevention of Harassment and Abuse in Sport.

Sessions on anti-doping education by the World Anti-Doping Agency and information about the Independent Testing Agency were valuable to the athletes in order to learn about the importance of clean sport.

Athletes also received a special presentation by Heidi Pellerano of the Wasserman Group to learn how to better market themselves as active athletes or legends, including best practices to build their own personal brand.