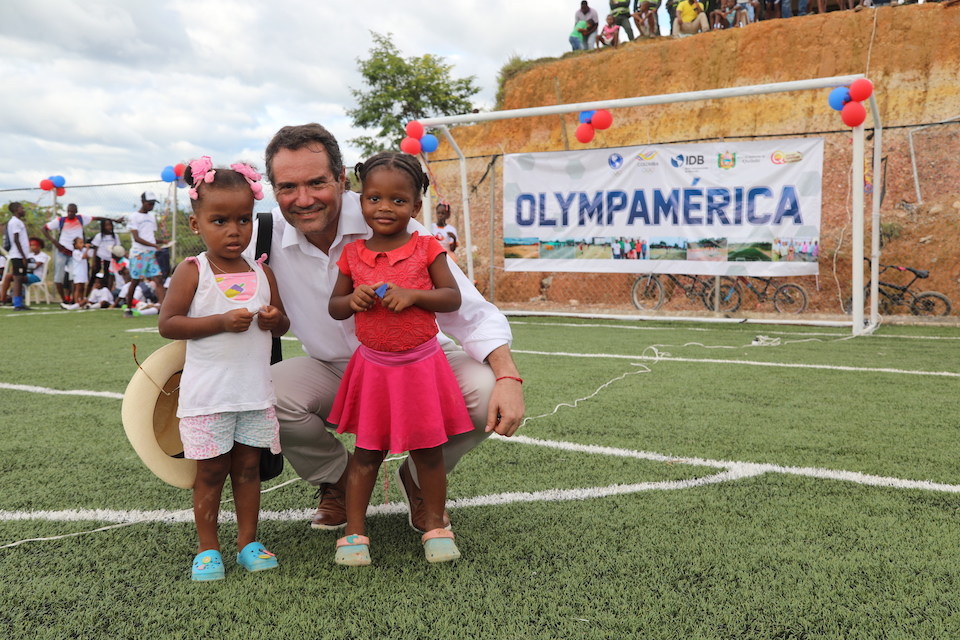 The Samper neighborhood in the city of Quibdo is often recognized as one of the poorest and most dangerous areas in all of Colombia. Panam Sports President Neven Ilic visited the neighborhood to inaugurate the first multi-field complex with artificial grass (turf) that was financed with resources from the Olympamerica Program of Panam Sports, along with the support of the Colombian Olympic Committee and Inter-American Development Bank.

More than 500 people participated in the colorful ceremony that featured the traditional ribbon cutting, unveiling of the ceremonial plaque and the official opening of the facility by the highest authority of sport in the Americas.

The ceremony marked a dream come true for thousands of young people living in poverty and facing the constant threat of entering the dangerous world of crime and drugs.

“What we have here, a place filled with people and children is simply a joy for us Quibdoseños. It brings us immense happiness. We are grateful to Panam Sports, as a dream of many children has come true. The children here needed this sports facility and we are sure that many athletes and footballers will come from here to compete for our nation and hopefully we will be represented well internationally,” said Alexa Prada, Secretary of Sports and Recreation in Quibdo.

“I am very proud because this shows that Panam Sports is doing something for the community. I think we have come very far inside Colombia, to a less-fortunate community where children need help in terms of infrastructure and having a beautiful place to develop their skills, have fun, get out of the streets and play sports. So we are very happy with this alliance with the Colombian Olympic Committee and the Inter-American Development Bank because we believe that we are fulfilling our social duty, which makes me and everyone at Panam Sports very proud,” said Panam Sports President, Neven Ilic.

The inauguration also represented a dream come true for the Colombian Olympic Committee. After more than three years trying to find resources, the project finally received the support of Panam Sports in order to fulfill their promise to the community of the Samper neighborhood.

“I believe everyone is very satisfied and the importance this has for the community that has closely followed the development of the problems that we are trying to solve with the creation of this facility cannot be understated. This is a community that needed a space for recreation, to interact with the community, as well as to develop the sport talent of the region. We cannot rule out the possibility that we will find great talents here, but above all else this is a space that will motivate children to use their free time in healthy ways and we hope it can be a space that can open up doors for more connections and interactions between these communities,” concluded Colombian Olympic Committee President, Baltazar Medina.