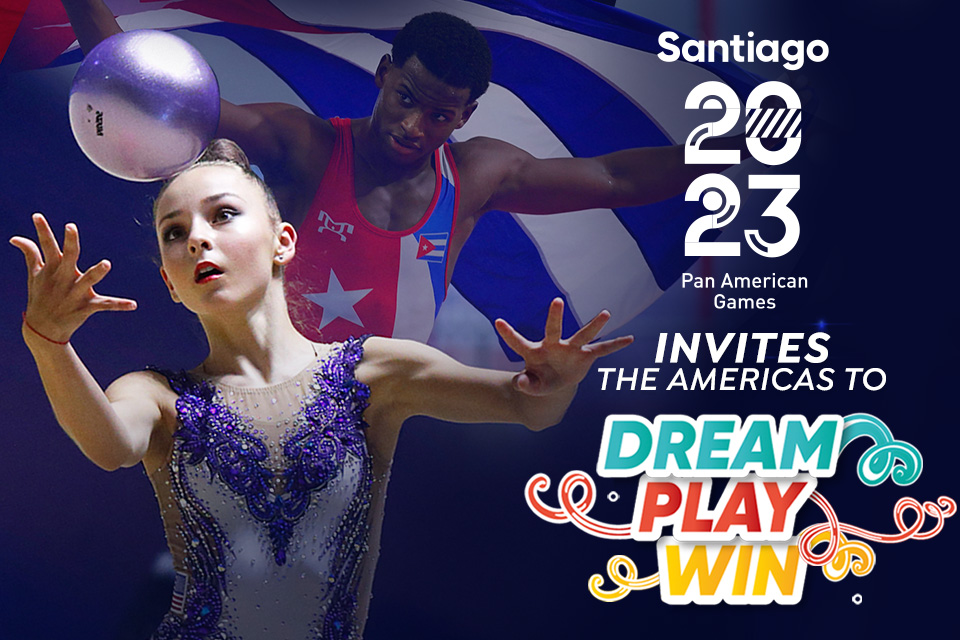 Today the organizers of the Santiago 2023 Pan American Games announce the Official Slogan of the next edition of the continent’s most important multisport event that will bring together more than 8,000 athletes from 41 countries.

The best athletes and para-athletes of the Americas who will compete at Santiago 2023 continue to Dream of glory and Play their favorite sports while hoping to Win the coveted medals and pride of their countries.

SANTIAGO, CHILE (February 22, 2022) — Today, athletes throughout the Americas receive their invitations to “Dream, Play, Win” at the Santiago 2023 Pan American Games following the announcement of the Official Slogan of the 19th edition of the multisport event.

Dream, Play, Win speaks to the experience of every athlete young and old. They Dream of representing their countries and their families, inspiring the next generation and following in the footsteps of their heroes. They Play with passion, energy and determination while always leaving their heart and soul on the field of play. And they Win not only medals and recognition, but also the incredible experiences of learning from other cultures, forging bonds with new friends and watching the best athletes excel at their craft, as well as the knowledge that they have what it takes to compete against the best in the world.

The Official Slogan was developed in tandem with the b20 Agency. It joins the long line of phrases that have been used to inspire athletes across the continent and spark excitement about the region’s next great sporting event.

Santiago 2023 teased the launch of the Official Slogan on the “Pelota Parada” tv show on TNT Sports last week alongside Chilean athletes such as weightlifter Maria Fernanda Valdes, gymnast Luciano Letelier and para-powerlifter Juan Carlos Garrido who are ambassadors of the slogan. Together they confirmed Santiago 2023’s commitment to work hard to deliver Pan American Games that are sustainable while focused on improving the community and celebrating high-performance sport.

“This is an important moment. We have all experienced these three concepts as they play a crucial role in the life of every athlete,” Garrido said on the program.

Other athletes throughout the continent celebrated the launch of the slogan while also inviting their fellow competitors to join them as they Dream, Play, Win.

“You’re invited to Dream, Play, Win! I am Arthur Nory, an Olympic, World and Pan American medalist in Artistic Gymnastics. In October 2023, we will see you at the Pan American Games in Santiago, Chile.”

“There is nothing more motivating than Dreaming, Playing, Winning. I am Alexandra Grande, a Pan American Karate Champion from Peru. I am preparing with everything I have to defend my title at the next Pan American Games of Santiago 2023.”

“DREAM, PLAY, WIN! These three words have helped me succeed in sport. I am Ruben Limardo, an Olympic Champion and three-time Pan American Champion in Fencing and I will surely see you at the Santiago 2023 Pan American Games!”

These incredible athletes and para-athletes and many more from each of the 41 countries of the Pan American Family are less than two years away from arriving in the Chilean capital to show their strength and seek qualification to the Paris 2024 Olympic Games. Their Dreams have begun, they are ready to Play and every athlete will Win the experience of a lifetime.