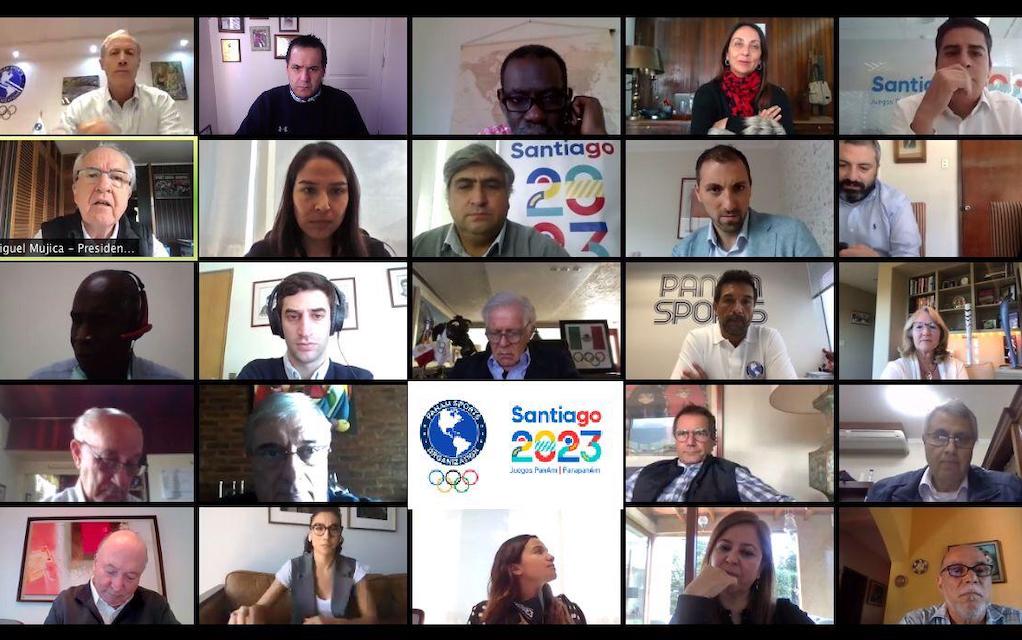 With the presence of Chilean Sports Minister Cecelia Perez, Panam Sports President Neven Ilic and Chilean Olympic Committee President Miguel Angel Mujica, among others, the meeting Coordination Commission of the Santiago 2023 Pan American Games took place with the goal of reviewing the progress and next steps in the organization of the most important sporting event on the continent.

SANTIAGO, CHILE (June 1, 2020) — The Coronavirus Pandemic has not relented throughout the Americans, but despite the difficult times that all the countries of the continent are experiencing, the Organizing Committee of the Santiago 2023 Pan American Games has not stopped its work. Although it has had to adjust to some budgetary adjustments and teleworking, the team remains 100-percent committed and has received unrestricted support from the Government of Chile, the Ministry of Sport and the Olympic Committee.

On a video call this Monday, a new meeting of the Santiago 2023 Coordination Commission was held with representatives of Panam Sports from all over the continent and its President Neven Ilic, the Chilean Ministry of Sport led by Minister Cecilia Perez, the National Olympic Committee headed by Miguel Angel Mujica and the Organizing Committee led by Executive Director Felipe De Pablo.

In a meeting that lasted for more than three and a half hours, the organizers of the next continental multisport Games presented all of the advances regarding Infrastructure, the Pan American Village, Marketing, Commercial and Budget, among other topics.

In the coming days, groundwork will begin on the country’s main sports complex, where the Great National Stadium Park will be built where several existing venues will be remodeled and new venues will also be built, including the much-anticipated Field Hockey Complex that will be for public use and a new Arena where the abandoned velodrome is currently located.

As for the budget, Santiago 2023 has confirmed USD $506.7 million that will help solidify the important legacy for the Host Country, not only in terms of sports infrastructure, but also in the social sphere which remains the primary objective for the Olympic Movement of the Americas.

“The commitment of the President of the Republic, Sebastian Piñera and of all Chileans to the Pan American Games is more apparent and more present than ever. The main driving force and our main motivation is the great social and community legacy that Santiago 2023 is going to leave. We are advancing according to deadlines and already in mid-June the groundwork begins at the National Stadium for the construction of the first project”, indicated the Sports Minister and President of the Organizing Committee, Cecilia Perez.

“We are very happy and calm with the great work and commitment that Chileans have towards the Games, despite the difficult times that we are living as a region with the Coronavirus. We are confident that Chile will organize an unforgettable Pan American sports festival,” said the President of the Santiago 2023 Coordination Commission, Mario Moccia of Argentina.

“I am very proud of the work they are doing here in Chile. We all know the difficult moment we are experiencing not only here, but throughout the world and especially in the Americas, and they have fully complied with the times and with the work to which they have committed themselves. I see effort, dedication and commitment from everyone, and that makes me very calm,” Panam Sports President Neven Ilic said emphatically.

The Santiago 2023 Organizing Committee does not stop. Despite the fact that there are more than three years until the most important sports festival on the continent begins, the southernmost country in the world has a team working 24/7 despite the pandemic and the difficulties that have arisen. They continue at a steady pace, with the main objective of delivering the best Pan American Games in history.