SANTIAGO, CHILE CHOSEN AS HOST CITY FOR THE PAN AMERICAN GAMES OF 2023 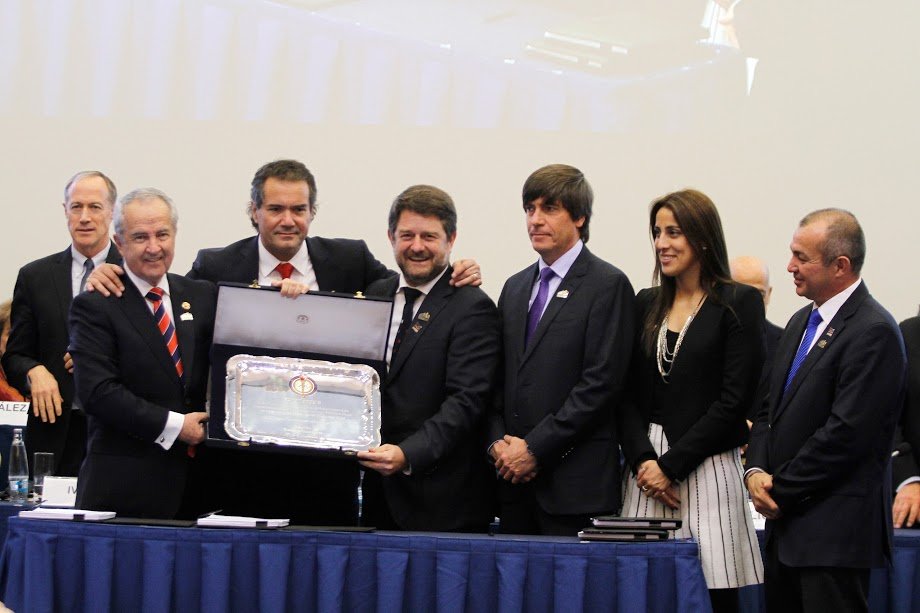 The decision was reached by the 41 member countries of the Pan American Sports Organization at the General Assembly currently taking place in Prague, Czech Republic.

Saturday November 4th, Prague, Czech Republic. – It was the only candidate city presenting to organize and host the Pan American Games 2023, regardless, due to statues, it still needed to be approved by an election involving the representatives of the countries belonging to the Pan American Sports Organization.

Close to midday in Prague, the Chilean delegation, composed of the Sports Minister, Pablo Squella, the Metropolitan Government, Claudio Orrego and the Chilean Olympic Committee President, Mugel Angel Mujica, made an official presentation to name Santiago as the official host city, which included a video including the natural beauty of the country, it’s people, the capital and the installations to better welcome the Games.

The culminating moment of the presentation was the message from President Michelle Bachet to the Assembly and a video of the most promising Chilean athlete, Laura Acuña, who showed what it’s like to live on the southern region of the continent, train on a field, and still shine at sports competitions. As this audiovisual piece was coming to an end, the salon doors of the Hilton Hotel  opened to reveal this notorious athlete being accompanied by her flag and receiving an ovation from all in attendance.

After the presentation came the election. The result was a surprising unanimous 41 countries of Panam Sports, which allowed Santiago to be officially named the host city of the Pan American Games 2023. The Chilean attendees rejoiced, as their country will, for the first time, host a continental event such as this.

“I’m incredibly happy. This is a dream come true for athletes, coaches, directing officers, and all Chilean people who love sports. This is the second most important event after the Olympic Games and we should feel very proud and get to work so we can be amazing hosts”, pointed out the Chilean NOC President, Miguel Angel Mujica

The Panam Sports President, Neven Ilic, lived this moment in a different way. Being the top representative of the Pan American Sports Organization, he was but a mere observer of the Santiago presentation and the election.

“Of course, I’m delighted Santiago was chosen by the Assembly. It’s a great responsibility, being an event which gathers the best athletes in the continent. I congratulate the Chilean Government, the Metropolitan Directors * and the National Olympic Committee for all the great work they’ve done and I wish them nothing but success in this extremely important and tenacious challenge they have ahead of them”, mentioned Neven Ilic.

The Pan American Sports Organization Assembly continues for the rest of the afternoon with presentations from different commissions and also with the update from the body corporate in charge of the next Pan American Games in Lima 2019.