TEAM USA AND THE AMERICAS DEMONSTRATE TOUGHNESS AT TOKYO 2020 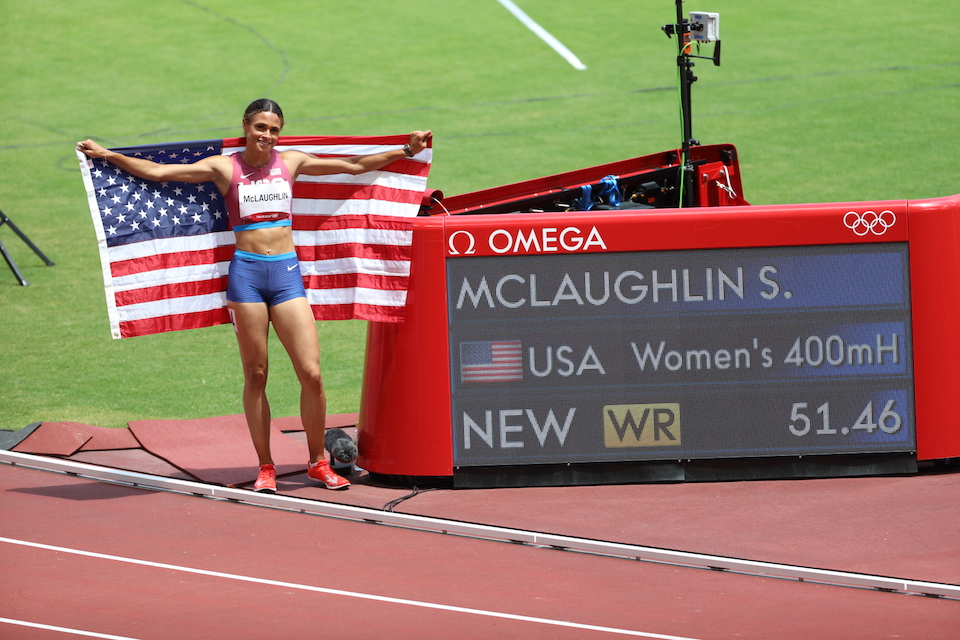 In unprecedented Olympic Games, athletes throughout the Americas overcame more than two years of adversity and uncertainty to deliver outstanding performances on the biggest stage in sport.

Athletes from the United States led Team USA to the top of the Olympic medal table for the the third consecutive Games at Tokyo 2020, edging out their top rival of China by just one gold medal earned on the final day of competition.

In a balanced effort featuring medals in nearly every sport, the U.S. team won 39 golds, 41 silver and 33 bronze for an impressive total of 113.

The star power was apparent for Team USA in Japan as the top athletes took down several World and Olympic Records on their way to the top of the podium. Swimmer Caeleb Dressel got the party started with two world records in the pool in the men’s 100m Butterfly and 4x100m Medley Relay and two new Olympic records in the 50m and 100m freestyle.

Rising track star Sydney McLaughlin followed his lead in Athletics, breaking her own world record in the women’s 400m Hurdles. Her teammate Ryan Crouser also set a new Olympic record in the men’s Shot Put. Meanwhile, Allyson Felix made history with her seventh gold and 11th overall medal, becoming the most decorated woman in Athletics in history and surpassing the great Carl Lewis’ total of 10 Olympic medals in the sport.

Team USA once again capitalized on the strength of its team sports, taking both 5v5 Basketball gold medals led by superstars Kevin Durant and Brittney Griner while the women’s team also took the first ever gold in 3v3 Basketball. The U.S. women also topped the podium in both the Indoor and Beach Volleyball events, while the Water Polo team won its third consecutive gold medal at the Games.

One of the biggest stars for Team USA made headlines for other reasons, as Simone Biles withdrew from several Gymnastics events to focus on her mental health. However, her teammate Sunisa Lee picked up the torch and put on a dazzling display to win the women’s All-Around gold. Simone returned for the final event of the Balance Beam where she took home the bronze.

Other outstanding achievements came from athletes like Katie Ledecky and Robert Finke in Swimming, Jennifer Valente in Track Cycling, Nevin Harrison in Canoe Sprint, Athing Mu in Athletics, Tamyra Mensah and David Taylor in Wrestling, Lee Keifer in Fencing, Anastasija Zolotic in Taekwondo, Carissa Moore in Surfing, Vincent Hancock in Shooting Sport and a sweep of the individual Golf golds by Nelly Korda and Xander Schauffele.

Although it was not a dominant overall victory by Team USA at Tokyo 2020, the U.S. athletes showed great perseverance by overcoming the extreme adversity brought on by the Covid-19 pandemic which forced the postponement of these Games.

And that toughness wasn’t only shown by the athletes of Team USA. In total, 15 countries of the Pan American Family earned medals at Tokyo 2020, eclipsing the 14 countries that medaled at the previous Games of Rio 2016. This balanced performance from the continent featured multiple historic golds and medals for countries like Bermuda, Puerto Rico, Ecuador, Venezuela, Grenada, Cuba, Canada and Brazil.

These were Olympics like no other that truly demonstrated the power of sport to bring the world together for amazing competition despite unprecedented challenges, as well as the power of the athletes of the American continent.

Panam Sports congratulates all of the athletes throughout the Americas who continued to follow their dreams despite the challenges and setbacks they faced while preparing for Tokyo 2020.

Now the Americas shift their focus towards the first Junior Pan American Games of Cali 2021 this November. We can’t wait to see what’s next for the athletes of the Americas.