ANOC HONORS THE BEST ATHLETES OF THE AMERICAS 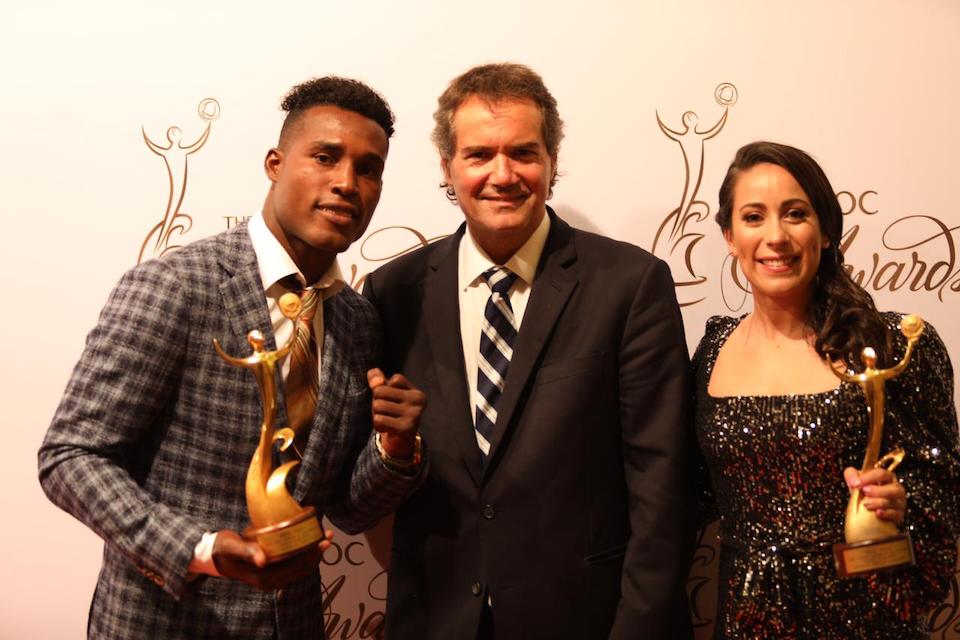 Colombia’s Mariana Pajon and the Cuba’s Julio Cesar la Cruz were chosen as the most outstanding athletes at the Lima 2019 Pan American Games by the Association of National Olympic Committees (ANOC) in Doha, Qatar.

Two of the most successful athletes in the history of sport in the Americas were honored at the ANOC Awards held at the Katara Hall in Doha, Qatar.

In the annual celebration that brings together the representatives of the 206 National Olympic Committees where the top performances of the year in each continent are celebrated, #TeamPanamSports Ambassador and BMX star Mariana Pajon of Colombia as well as Boxing Champion Julio Cesar la Cruz of  Cuba were recognized for their gold medal performances at the Lima 2019 Pan American Games.

Mariana Pajon, despite having one of the most difficult years of her career after an injury, knew she was ready to get back on top. When initial diagnosis indicated it would be very difficult for her to get back on a bicycle, she didn’t give up and put all of her energy into recovering and continue with her sport that she loves so much.

She returned to training and in August was crowned the Pan American Champion for the second time in her career, this time at Lima 2019. The double Olympic medalist made a spectacular recovery to take the crown at the continental Games, continuing a promising career focused now on the upcoming Tokyo 2020 Olympics where she will seek her third gold medal. For these achievements, ANOC awarded Pajon as the Best Female Athlete of the Americas for 2019.

“For me it is a big surprise because there is a group of very important and very talented athletes around our continent. This motivates me a lot for what is coming. I have the qualifications for the Tokyo Olympics and I hope I do very well,” Mariana Pajon told Panam Sports.

On the men’s side, the winner was the Cuban boxer Julio Cesar la Cruz. The Olympic Champion in Rio de Janeiro, a four-time World Champion and three-time Pan American Champion, has plenty of reasons for this award. In 208 fights throughout his career, he has an impressive record of 191 wins, 32 by KO, and only 17 defeats.

A recognition more than deserved for this athlete who dreams of repeating Olympic Gold in Tokyo 2020.

“I am very happy with this award. I thank ANOC, Panam Sports, my Cuban colleagues, my mother and my people. This award means a lot to me. For me to represent Cuba in this beautiful event and win this recognition is a tribute to all the sacrifice and the effort I have made. Now I look forward to the qualifier to Tokyo and of course I want to go for my second gold medal at the Olympic Games,” said Julio Cesar la Cruz.

More recognition will soon come for the best athletes from the Pan American Games of Lima 2019, as Panam Sports prepares to host the inaugural Panam Sports Awards in Fort Lauderdale, United States on December 13.

Here, the Pan American Sports Organization will reward the best Athletes, Coaches and National Olympic Committees for their incredible and inspiring performances at Lima 2019.