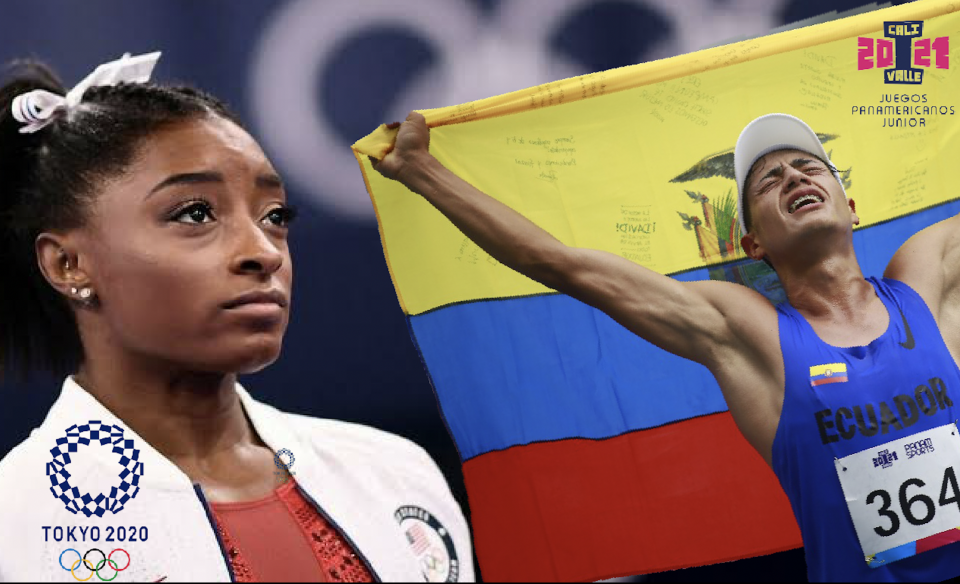 The success, despite great uncertainty, of the Tokyo 2020 Olympic Games and the Cali-Valle 2021 Junior Pan American Games during a pandemic that seems to never end and an increased awareness of the mental health of high-performance athletes thanks to Simone Biles and Naomi Osaka were the major themes in sport throughout the Americas and the world this year.

What lies ahead in 2022? The calendar is full of events, but the new Omicron variant has everyone worried.

The day is Tuesday, July 27, 2021. The eyes of the world were on the women’s artistic gymnastics team competition at the Tokyo Olympics. Team USA was preparing to compete in the vault event. And there she was, the most decorated gymnast in history, Simone Biles.

She started warming up but she didn’t look comfortable. She could not coordinate her movements or execute the vault that she wanted. Suddenly and to everyone’s surprise, she took her things and withdrew from the competition area to the dressing room.

The media, other gymnasts, judges and millions of viewers around the world were stunned by such an unusual scene. The one who was named the star of the Games could not face the pressure, and in an act of absolute bravery, she stepped aside and withdrew from competition.

Hours earlier, the young Japanese tennis player, Naomi Osaka, who had the honor, or rather the pressure, of carrying the torch to light the cauldron at the Opening Ceremony, inexplicably lost in the third round to a lower-ranked opponent.

Two world-class stars left Tokyo and brought an issue to everyone’s mind that is often neglected and ignored — the mental health of high-performance athletes.

“If there is no mental health, ultimately there is no health. Cases like that of Biles put on the table the enormous gap between mental and physical health. While an injury is accepted as a good reason for not ‘being able’ to compete, a mental problem is not,” explains the Sports Psychologist, Soledad Bacarreza.

“After Tokyo it is more understood that the sports psychologist must not only optimize performance in competition, but also take care of mental health in the face of the stress to which high-performance athletes are subjected, as their performances will always be public. Athletes are not just a show or entertainment, they are human beings with extra pressure for what is expected of them. It is essential that each training program includes a psychologist. Mental and physical health should not be separated,” Bacarreza added.

Despite the experiences with Simone Biles and Naomi Osaka, the Tokyo 2020 Olympic Games were a spectacular party, with surprising results including an amount of viewers never seen before in the history of the Olympics.

The International Olympic Committee, the Organizing Committee and the Government of Japan, despite many voices opposed to hosting the Games, carried out the task and were filled with praise from spectators and thousands of athletes who needed the world’s most important sporting event to take place.

Despite China threatening their lead on the medal table, Team USA once again took first place with 113 medals, 39 gold, 41 silver and 33 bronze medals.

Canada, Brazil, Ecuador, Puerto Rico and the Dominican Republic all were pleasant surprises with historical performances, as well as Bermuda which earned its first Olympic gold medal in history with Flora Duffy winning the Women’s triathlon event.

After two date changes due to the pandemic that affected the entire world, Panam Sports, the Organizing Committee and the Government of Colombia were finally able to host the first Junior Pan American Games in history in the city of Cali, in the Valle del Cauca, Colombia.

While most sporting events in the world were suspended or postponed until 2022, Cali 2021 brought together more than 3,500 athletes from 41 countries with all the necessary biosecurity measures to give the next generation of stars the chance to succeed that they deserve.

Brazil shined in first place on the medal table while more than 220 athletes from throughout the Americas qualified to the Santiago 2023 Pan American Games. The entire city of Cali was enchanted with this sports festival and the culmination of the Games will surely mark a before and after in the development of young athletes throughout the continent.

“It was a personal desire for many years, which finally saw the light of day and was a surprising success story. The athletes enjoyed it to the fullest and were able to show that this generation is up for great things and that many of them will be the future Olympic medalists of Paris 2024 and Los Angeles 2028. The first athletes are already qualified to Santiago 2023 and that makes us very happy as an Organization,” said Panam Sports President, Neven Ilic.

Two years have passed since the Covid-19 Pandemic struck the entire world and it seems to have no end date. The new Omicron variant is already beginning to cause concern in Europe. More than 5,000 flights were canceled during the Christmas holidays and governments are beginning to take strict measures once more.

In the Americas, although there has been a considerable decrease in the number of infected and deceased, the arrival of Omicron has been met with concern in several countries.

There are several events in 202 that appear on the sports calendar, many of which were already postponed due to the pandemic. Now uncertainty is creeping up again as the world watches and waits to see what happens with the new variant of the virus.

The South American Games in Asuncion, the South American Youth Games in Rosario, the Central American and Caribbean Games in San Salvador, the Caribbean Games in Guadeloupe and the Bolivarian Games of Valledupar 2022, among many others, are on the horizon. It is expected that the pandemic will not prevent these events from taking place in our region. The same expectation is held for the various world championships and continental tournaments that are scheduled for the upcoming season that is teeming with excitement and events.