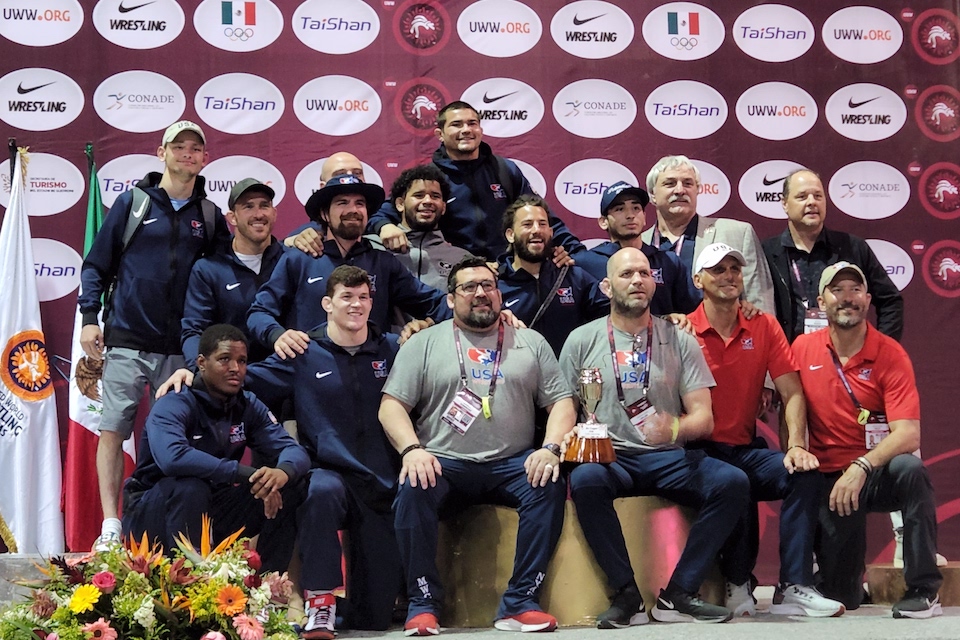 With four golds in 10 events, Team USA takes the overall Greco-Roman title at the continental wrestling championships in Acapulco, Mexico.

After two days of thrilling competition, the athletes from the United States led their country to the top of the podium in the Greco-Roman division.

Mexico was led by Daniel Vicente who took home Mexico’s only gold in the Greco-Roman events in the 82kg division. Mexico also had four wrestlers finish with silvers, including Edsson Olmos (72kg), Jose Rodriguez (63kg), Samuel Gurria (60kg) and Axel Andre (55kg) while Alfonso Leyva (87kg) finished with a bronze.

Cuba was led by 130kg and now four-time continental champion Oscar Pino Hinds. His dominating performance earned him the golden shoe as the best wrestler in the Greco-Roman tournament. Joining Oscar at the top of the podium from Cuba were Daniel Gregorich (87kg) and Yosvanys Pena (77kg) who both earned golds on Day 2. Juan Luis Conde also earned a silver medal in the 97kg division, falling to two-time continental champion Kevin Mejia Castillo from Honduras in the final.

It was nearly a historic day for Guatemala, as the country sent two wrestlers to the finals in search of their first ever gold medal in the Greco-Roman continental championships. David Choc Huoc was defeated by Pena from Cuba in the 77kg final while Reinier Jimenez lost to Vicente from Mexico in the 82kg division.

WOMEN’S WRESTLERS OFF TO FURIOUS START

The Women’s Freestyle competition also began on Day 2 of the championships in sunny Acapulco.

The star of the day was Canada’s Karla Godinez who defeated two former world champions on her way to her first ever continental crown in the 55kg weight class. The wrestler who was born in Mexico showed resilience throughout the competition while competing for the first time in the Pan American Championships.

Karla booked her spot in the semifinal by taking down U-23 world champion Lucia Yepez from Ecuador by a score of 4-2.

She then squared off against defending Pan American champion and 2019 World Champion from Team USA Jacarra Winchester in the final. It was a back-and-forth affair that saw the wrestlers tied 5-5 as time expired, but Godinez had the better four-point move to earn the gold medal.

Her teammate Laurence Beauregard also claimed the gold medal in the 59kg division, while Team USA won two golds of their own on the strength of Forrest Molinari (65kg) and Skylar Grote (72kg).

Watch every minute of the action LIVE on the Panam Sports Channel. Download the App or join us on the web at www.panamsportschannel.org.